Wooster High School celebrated five student-athletes this evening that have committed to continue their athletic careers at the collegiate level. 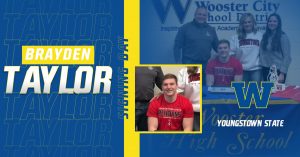 Brayden Taylor signed his National Letter of Intent to attend Youngstown State University in the fall of 2020.  Brayden will join the Penguins Football team with plans to major in Business.

Brayden chose YSU because of the football program and the campus.  Brayden is a four year letter winner in both football and lacrosse and a three year captain in each sport.  During his senior football campaign, he earned First Team All-Ohio Cardinal Conference, 1st Team All-District, and Third Team All-Ohio honors.

Brayden’s most memorable experience about being a General… “Defeating Mansfield Senior this past season, winning 18-17!”  The win solidified an Ohio Cardinal Conference title. 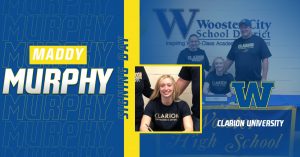 Maddy Murphy signed her National Letter of Intent to join the Clarion University Swimming and Diving Team in the fall of 2020.  She plans to major in Accounting at Clarion.

Maddy chose Clarion because she knew it was the right fit for her academically and athletically.  “As soon as I stepped on campus, I knew I wanted to spend the next four years there.  The coach and team were so inviting.  I can’t wait to be a part of such an amazing team!”  Maddy has excelled in the classroom and in the pool.  She is a member of National Honor Society, a  four year member of the Honor Roll and a four- time Academic Award Letter Winner.  A swim team captain has been a to-time athlete of the month and a member of the NEAC All-Star team.

Maddy’s most memorable experience about being a General… “The camaradie shared by all Wooster athletes.  I’ll never forget being a part of such an amazing swim team, nor can I forget being a part of the Frontline- cheering and supporting all teams, singing the alma mater with my classmates after huge wins, like when football beat Mansfield Senior this past fall.” 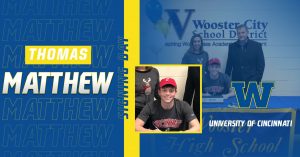 Thomas Matthew signed his National Letter of Intent to attend the University of Cincinnati in the fall of 2020.  He will join a very successful UC Men’s Swimming and Diving Program.  UC’s Men’s team is coming off a back-to-back American Athletic Conference Championships (2018 & 2019) and poised to repeat that feat again.  He is undecided as to his field of study.

Thomas chose Cincinnati because of the coach and the team.  “They were very easy to talk to.  In the pool they work hard and have been very successful.”  Thomas has excelled in the classroom and the pool.  He has earned Two Academic Letters as a General.  The team captain has also been recognized the past two years as the Ohio Cardinal Conference Swimmer of the Year, NEAC Swimmer of the Year, and All-Ohio.  He holds numerous Varsity records in the pool at Wooster too.

Thomas’s most memorable experiences about being a General… “Being a part of the swim team.  The camaraderie and traditions that the swim team has.  Accepting everyone like a brother.  I am happy to have lifelong friends and grateful for their support and this amazing school.” 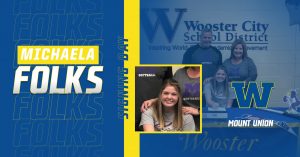 Michaela signed her letter of commitment to attend the University of Mount Union and compete with the Purple Raiders Softball Team starting in the fall of 2020.  She plans to major in Exercise Science and pursue a degree in Physical Therapy.

Michaela chose Mount Union because she felt at home on campus.  She’s excited to be able to attend a college where she can complete both her Bachelor and Doctoral Degrees all on the same campus. Michaela has excelled in the classroom and on the field.  She is Four year Letter Winner in Academics and Softball.  The National Honor Society member also earned three varsity letters in swimming.  Last season, Michaela earned All-Ohio Cardinal Conference Honorable Mention Honors.

Michaela’s most memorable experience about being a General…”Having incredible coaches who emphasize the importance of playing for the team, not the individual.” 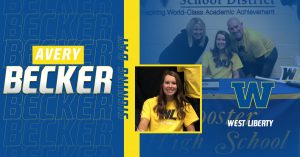 Avery signed her letter of commitment to attend West Liberty State University in the fall of 2020.  She will compete with the Hilltoppers Softball team who won their first ever Mountain East Conference Tournament Title and qualified for the NCAA DII Regional Tournament.  She plans to major in exercise science.

Avery decided on West Liberty because of the beautiful campus and excellent exercise science program.  The team and coach made her very welcome and at home. Avery, a four year Academic Award Letter winner and National Honor Society member will letter four times in softball as a General.  A two-year team captain, Avery has Ohio Cardinal Conference twice thus far and All-First team Daily Record in softball.  She also earned a varsity letter in volleyball.

Avery’s most memorable experience about being a General…”Passionate coaches who care for the team and having an opportunity to play for my mom.”

To see all of the  pictures from signing day, check out the photo gallery!