Wooster High School celebrated six student-athletes last night that have committed to continue their athletic careers at the collegiate level. 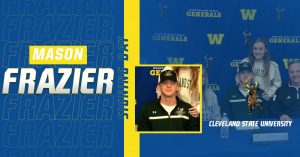 Mason Frazier signed his letter of commitment to attend Cleveland State University in the fall of 2020.  Mason will join the Vikings’ Men’s Golf Team and will major in business.

Mason chose CSU because he felt it was the best all-around fit for him as a student-athlete and the best fit for his family.  The Vikings have a stellar golf program and have won the Horizon League Golf Championships five out of the last six years.

Mason has excelled both in the classroom and on the golf course for the Generals.  He is a two-time Academic Award Letter recipient and a four-time Varsity letter winner in golf.  During the course of his career at Wooster, Mason earned Second Team All-Ohio Cardinal Conference honors for his freshman campaign and then was a First Team All-OCC pick the remaining three seasons.  He also earned All-District honors three times and qualified for the OHSAA State Golf Championships twice.

Mason’s most memorable experience as a General… “Qualifying and competing in the state Tournament my freshmen year with the golf team!” 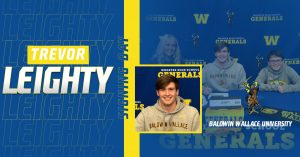 Trevor Leighty signed his letter of commitment to continue his education and athletic career with the Baldwin Wallace University Baseball Team starting in the fall of 2020.  In 2019, the Yellow Jackets were co-Ohio Athletic Conference Champions and earned their fourth NCAA Tournament berth in the last six years.  Trevor is undecided on his field of study at BW.

Trevor chose Baldwin Wallace because of the fit.  “I felt right at home on campus and with the team.”  A two-sport standout, Trevor earned two letters in football and three letters in baseball as a General.  Throughout his baseball career, he earned All-Ohio Cardinal Conference Second Team honors and Honorable Mention All-Northeast District.   Trevor was also named to the All-Daily Record Baseball Team and has also served on the OCC Leadership Council.

Trevor’s most memorable experiences as a General… “Building great relationships with all of my teammates and coaches.  And, knowing that the community always has your back and is supporting you.” 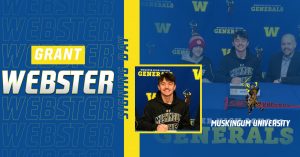 Grant Webster signed his letter of commitment to attend Muskingum University next fall where he will compete with the Fighting Muskies Men’s Lacrosse team.  Grant plans to major in Sport Management.

Grant’s most memorable experiences about being a General… “Having great facilities, great coaches, and great support!” 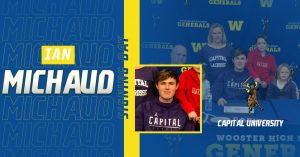 Ian signed his letter of commitment to attend Capital University in the fall of 2020.  He will compete with the Crusaders Men’s Lacrosse team.  Ian plans to major in Finance and Economics and further his academic career in law school.

Ian chose Capital because of their strong academic programs and well known law school.  The strength of the Crusaders Men’s Lacrosse team also factored into his decision.  Since the program’s inception in 2014, the Crusaders have finished fifth place or better each season in the OAC.  They are two-time OAC Champions with their most recent title coming from the 2019 season where they went undefeated in league play. As a two-sport athlete for the Generals, Ian has earned three varsity letters in soccer and four in lacrosse and also earned All-OCC and All-District Honors in soccer twice.  Ian is also a four year Academic award recipient.

Ian’s most memorable experiences about being a General… “The camaraderie between all athletes.” 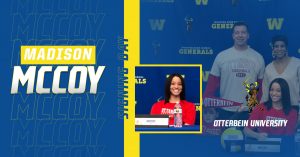 Madison signed her letter of commitment to attend Otterbein University in the fall of 2020 where she will compete with the Cardinals’ Volleyball team.  Madison plans to major in Biology with a pre-veterinary medicine track.

There are many reasons why Madison chose Otterbein.  She fell in love with the academic and athletic programs, the campus, and her future teammates and coaches.  “Columbus is an ideal location because it’s not too far from home, close to my family, and I love the area.”  She is also excited about the strength of the volleyball program.  The Cardinals have qualified for the NCAA DIII Championships six times, with two of those appearances coming in the last three seasons.

Madison, a three time Academic Award Letter winner, has also earned four letters on the volleyball court, two on the track, and one from a season of basketball for the Generals.  She is a two-year Volleyball Team captain and has earned OCC honors three times during her career, with First Team All-OCC honors as a senior.  In 2019 she helped guide the Generals to their first OCC Volleyball title in 12 years, in addition to being named First Team District 4.

Madison’s most memorable experiences about being a General… “I will always remember my family, friends, teammates and coaches for always supporting me.  I’ve been blessed to have a great team with a great group of friends all four years of high school.” 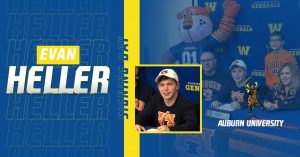 Evan signed a Letter of Intent to continue his education and athletic career at Auburn University.  He will compete with the Tigers Wheelchair Basketball Team.  Evan will pursue a degree in special education.

Evan chose Auburn because it is one of the top academic schools in the country but he also just felt like he belonged when he visited.  “Everyone I met on my visit was very friendly and welcoming.  Auburn just felt like home.  I really connected with the Auburn Coach.”

Evan is also excited about the rise of Auburn’s Wheelchair Basketball Program.  “The team is one of the newest collegiate men’s teams in the country.  They have risen through the college ranks this season as a contender and earned some big wins over other great teams.”  Evan looks forward to playing a large role in helping Auburn further their success and vie for a National Championship.  Beating Alabama, one of the top Wheelchair teams in the country, is also on Evan’s list.

Evan has excelled as a member and captain of the Generals Wheelchair Basketball team where has lettered four times for Wooster.  During his career, the team has gone undefeated with a perfect 48-0 record and won two Wheelchair Basketball State Championship titles.  Evan has also excelled in track where he is a three-time letter winner and a three-time state runner up, earning All-Ohio accolades.  That’s not it though- Evan has also been named a National Wheelchair Basketball Association (NWBA) Academic All-American and been named to the NWBA All-Tournament Team (1 of 10 high school players in the nation).

Evan’s most memorable experiences about being a General… “Being a Wooster athlete allowed me to meet other students I would have never interacted with if I wasn’t an athlete.  I have developed lifelong friendships as a Wooster athlete.”

Congratulations to all of our student-athletes!  Be sure to check out the photo gallery from last night! https://woostergeneralathletics.com/photos/student-athlete-signing-celebration-2-26-20/