On Wednesday night in the Wooster High School Gym, family and friends celebrated the college signings of five Wooster Athletes. Over the last four years, these athletes have made our Wooster Generals’ Community Proud.  We are honored to share their stories with you as they commit to the next phase of play at the Collegiate Level. 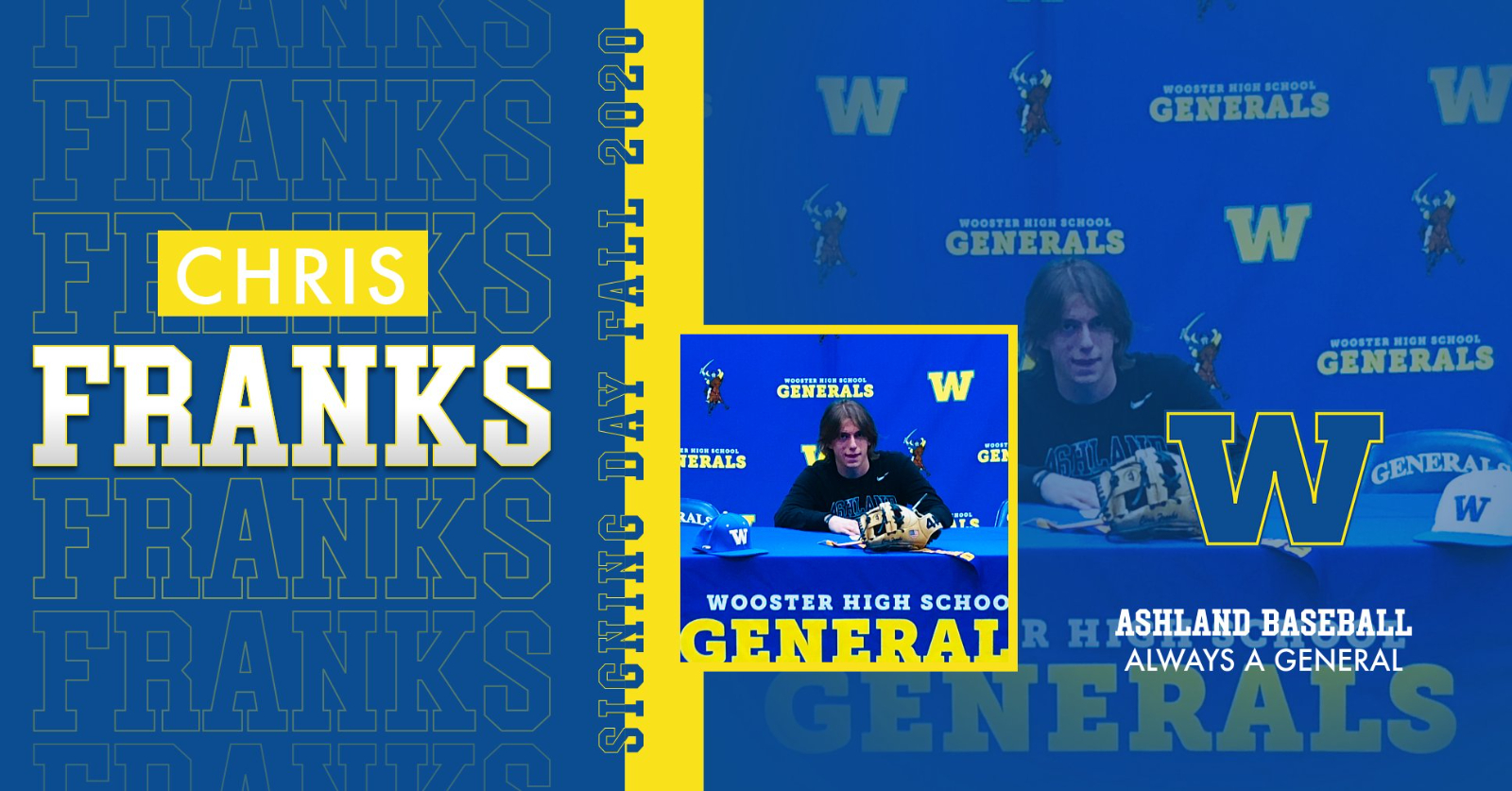 Wooster Pitcher Chris Franks, who described himself as loving baseball since he could walk, has signed a National Letter of Intent Scholarship Offer To Play Baseball at Ashland University.

Chris Franks has been playing baseball his entire life, and with the of a few years of flag football in elementary school, baseball is the only sport he has ever known to love.  As a 3 year Letter Winner at Wooster, Chris was a 2 Team All Ohio Cardinal Conference Player and has stood out among the baseball community in Wooster as someone to be proud of.  Throughout the years, she has worked hard through football and basketball season while excelling in the classroom.  At Ashland University Chris will be studying to be an Athletic Trainer, seeking a career where he can help others by giving back to the community through sports. When asked who has inspired him most in his athletic career, Chris said, “My parents have inspired me the most.  I am so thankful because they taught me how to work hard in school and in baseball, giving me the opportunity that I have today”.  Congratulations Chris! 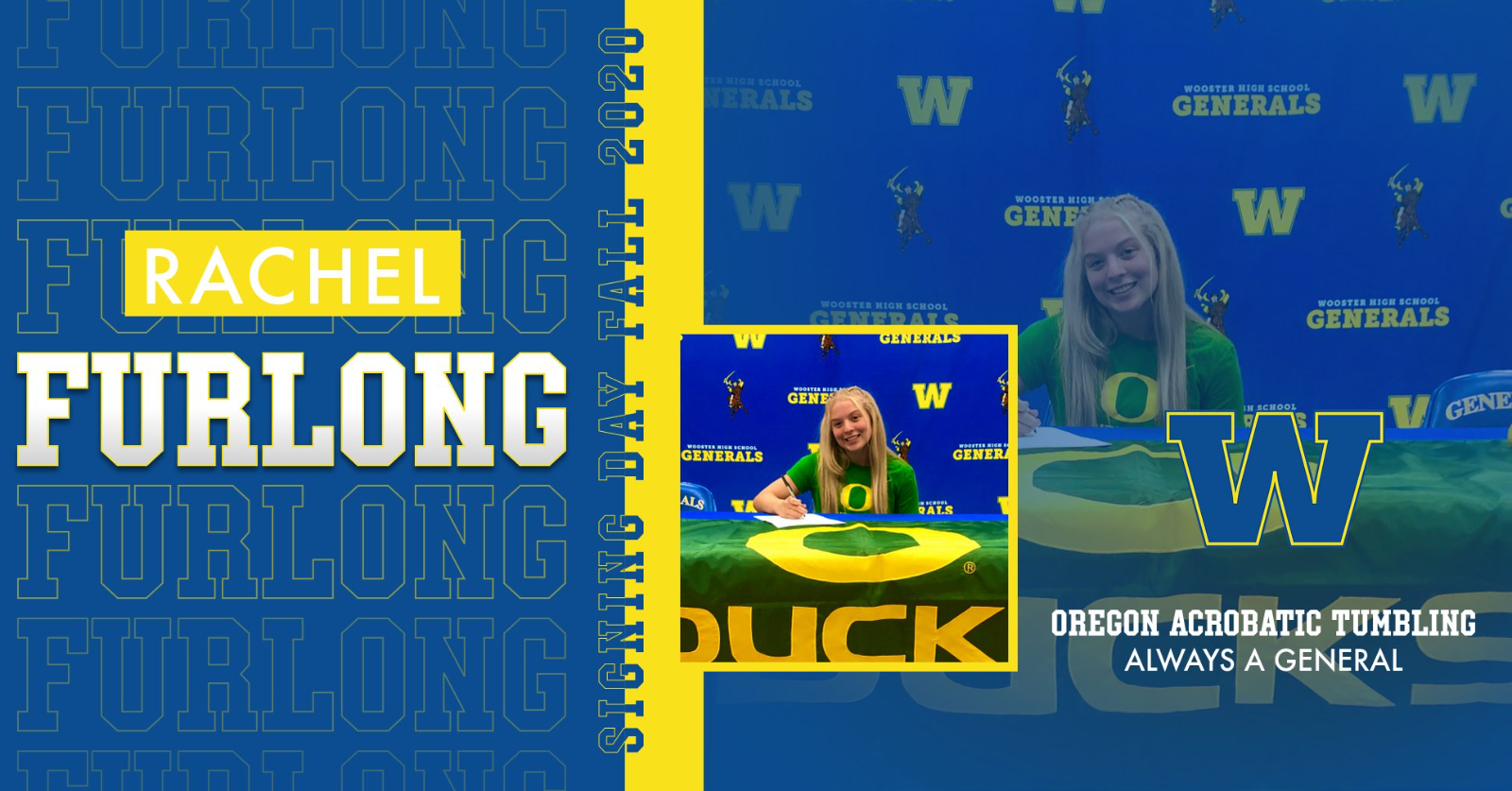 Rachel Furlong has competed in Wooster Gymnastics for the last four years and has now accepted a National Letter of Intent scholarship offer to compete at the University of Oregon in Acrobatic Tumbling.

As a lifelong Gymnast, Rachel has worked hard to achieve great success throughout her high school career. As a Gymnastics State Finalist her sophomore year, Rachel was just getting started.  In her Junior Year, Rachel not only was a State Finalist, but she finished 3rd in the OHSAA Gymnastics State Tournament as an All Around Gymnast making her the highest placing Gymnast in WHS history. Rachel also volunteers as a gymnastics coach and is very involved in school spirit. She loves to attend football and basketball games and be part of the frontline.  RWhen asked who has inspired her most in her athletic career, Rachel said, “All of the gymnastics coaches I’ve had throughout the years and my family. They all have taught me hard work, perseverance, self respect and so much more. They have been such an amazing support support system and I look up to all of them. Without them I wouldn’t have been here today.”  Congratulations Rachel! 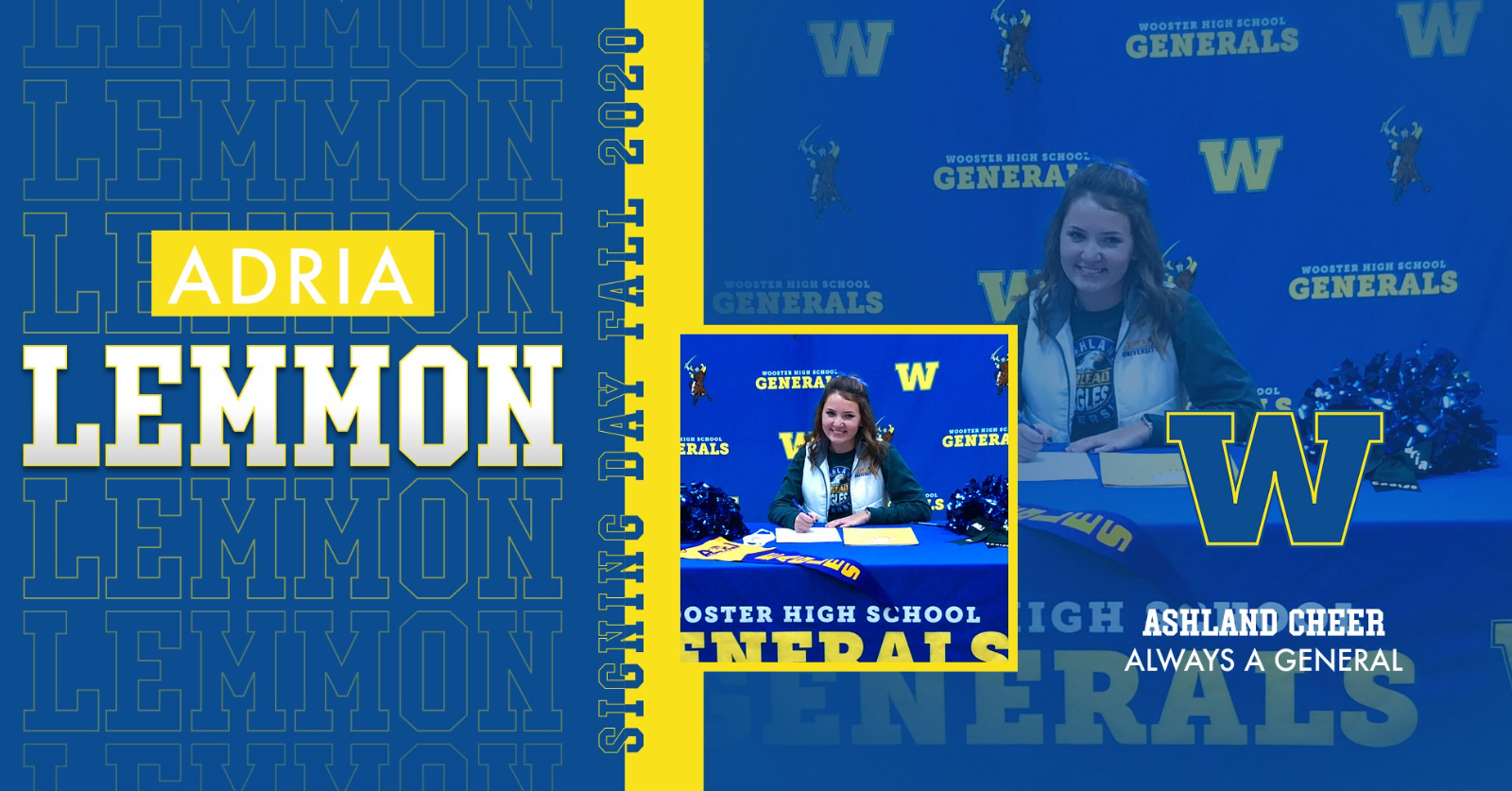 Adria Lemmon is excited to take her talent and love of cheering to Ashland University, signing a National Letter of Intent Scholarship offer.

Adria has been a Generals Cheerleader since middle school and is a 2 Year Letter Winner at WHS.  Throughout the years, she has worked hard through football and basketball season while excelling in the classroom.  Adria carries a 3.9 GPA and has spent her time at WHS involved in Yearbook (Student Life Editor), National Honors Society, Student Council (Co-Social), Drug Free Clubs of America, and was chosen to be a Portrait of a Graduate Representative. She is also a designated Senior Leader Among Wooster Cheer.  Adria will be studying nursing at Ashland and is looking forward to a career as a Pediatric Nurse.  When asked who has inspired her most in her athletic career, Adria said, “My dad, Tony Lemmon has inspired me the most because he puts his life on the line everyday and never gives up! He always goes above and beyond and always pushes me to do the best I can do in everything. As a first responder, his first instinct has always been to help others and as I go into nursing I will think of what he does everyday to push me to work harder!” Congratulations Adria! 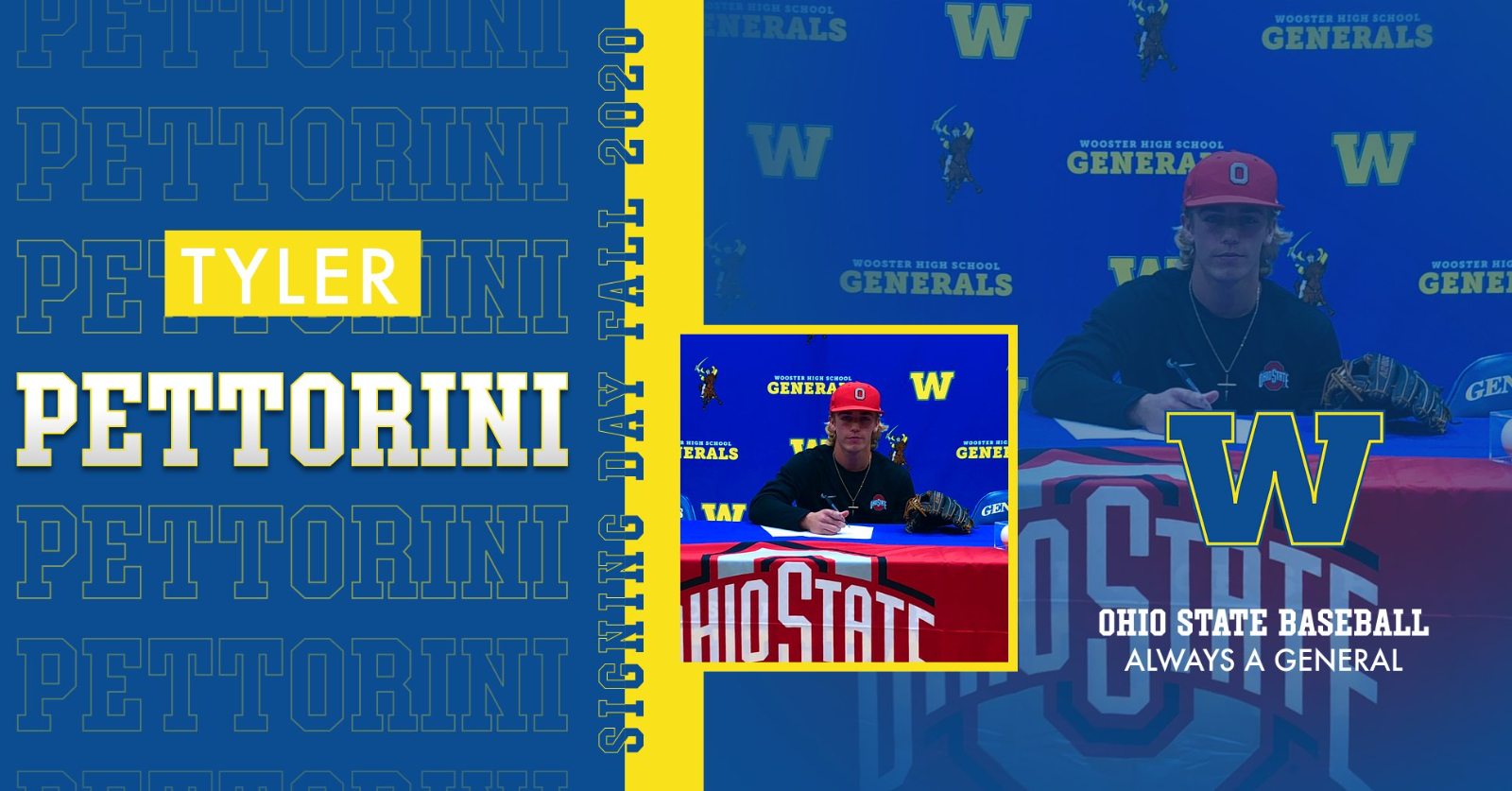 Tyler Pettorini, a 3 Sport Athlete at Wooster (Football, Basketball, Baseball) has singed a National Letter of Intent Scholarship to play Baseball at THE Ohio State University.

Tyler Pettorini  will represent the Generals in the Big Ten as a versatile Baseball Player that can play many positions at Ohio State.  In his sophomore year at Wooster, after hitting .523, 40 runs, 35 RBI, 12 doubles, 4 home runs and stealing 21 bases, earned first-team Ohio Cardinal Conference honors, First Team All-Region (Northeast Ohio) and First-Team Division I All-Ohio honors, one of only two sophomores to make the First Team. Tyler made Prep Baseball Report’s prestigious Elite 25 All-State Team which covers all Ohio Divisions as well as First-Team Division I honors for PBR. Tyler is currently ranked in the Top 500 in the National Perfect Game rankings and been ranked in the Top Ten in Ohio for Prep Baseball Report. PBR also named Tyler to its 2020s All-Decade Team. Perfect Game also twice named Tyler a Pre-Season All-American. Tyler was also Second-Team All North Coast League his Freshman year. When asked who has inspired him most in his athletic career, Tyler said, “I want to thank my mom, dad, my sister Tori and my brother Tanner. They have supported me in countless ways including by going all over the country to watch me play. I would also like to thank my grandparents who have also provided years of support. I would not be the player and student I am today without my teammates, coaches, teachers and my counselor. Losing my Junior year of baseball has inspired me to make the most of my Senior year and never take for granted the opportunities I have been blessed to receive.” Congratulations Tyler! 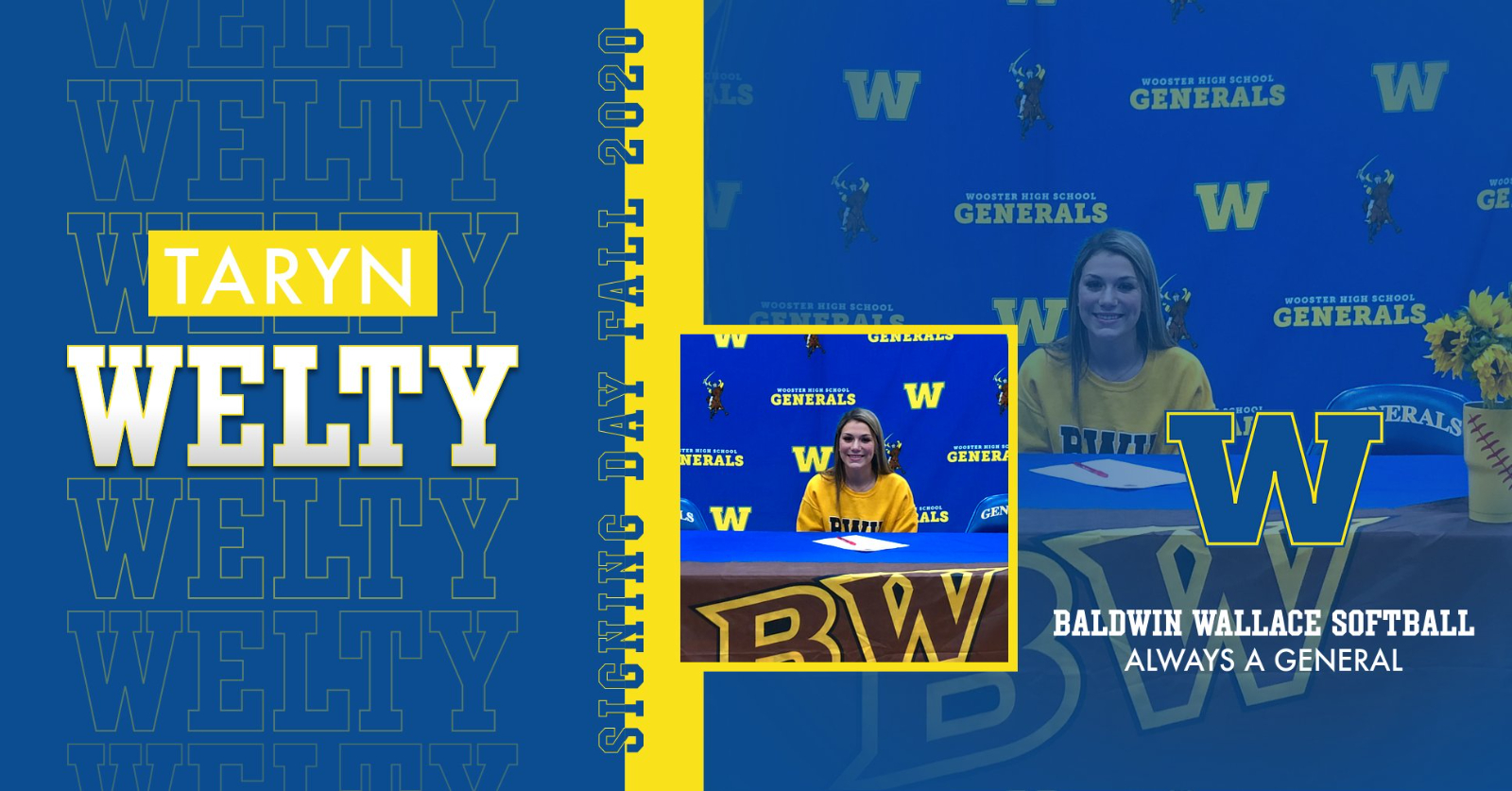 After dedicating her entire high school athletic career to softball with Wooster, Taryn Welty will represent the Generals on the Softball Team at Baldwin Wallace University next year.

Tarn Welty started playing softball when she was little in local 8U Softball club leagues.  She worked has hard and tirelessly throughout her childhood, Middle School and the last 4 years with the Generals, dedicated on the field to the game she has loved the most.  Taryn will finish her 4 years with the Generals as a letter winner each year, making an impact ever since her freshman year.  As an athlete that can play any position on the field, she has loved pitching and hitting, leading the Generals in her play throughout her career. When attending Baldwin Wallace, Taryn plans to study Criminal Justice as she is passionate about helping people and sees a future doing so working in the FBI. When asked who has inspired her most in her athletic career, Taryn said, “My father (who is also one of Taryn’s lifelong coaches) has inspired me most by pushing me to be the best I can be in life and never giving up on me, even when I wanted to give up on myself in school and softball.” Congratulations Taryn!

The Wooster City Schools and the Wooster Athletic Community Congratulates all of our signees on their distinguished accomplishments and sends them off not just as athletes, but those who carry the honor being ALWAYS A GENERAL!

*Video of the College Signing Event Can Be Viewed at woostergenerals.tv